Whether it’s an OBT or an Avicularia, many new tarantula owners wonder why their tarantula isn’t webbing.

Not all tarantula species will create a lot of webbing outside of molting, creating egg sacs, and eating. However, for the species that do tend to web a lot, not webbing usually comes down to not feeling secure in their enclosure, not having enough web anchor points, or the tarantula is a mature male. It is normal for newly purchased tarantulas to take up to a month to settle into their cage and start webbing.

Can all tarantula make a web?

All tarantulas have the ability to create silk, but their silk isn’t as varied as araneomorphs (“modern spiders”). In fact, according to National Geographic, they even have the ability to secrete silk from spigots on their feet to help them hold onto smooth surfaces! However, they do not create elaborate webs like orb weavers, and some choose not web much at all.

Tarantula webbing is very thick, white, and often takes the form of a web tube or tunnel. Some species have a propensity for densely coating their entire enclosure with thick webbing, while others sparsely lay down webbing only when they eat or molt.

There are many obligate burrowing species that do not create web tunnels or other structures. Although, they will still usually line their burrows with silk for stability, plug their burrow entrance with silk prior to molting, and lay down a molting mat.

Why isn’t my arboreal tarantula webbing?

One of the most frequent questions that people ask on tarantula boards relates to why their arboreal tarantula (usually an Avicularia species) hasn’t started webbing yet.

More often than not, arboreal tarantulas won’t web because something is either wrong with their husbandry or they were recently transferred to a new enclosure. Although I have had arboreal slings instantly begin throwing webbing up, it usually takes time for a tarantula to settle into its new environment. It is completely normal for an arboreal T to take a couple of weeks to become comfortable enough to web.

If more than a couple of weeks has passed and your arboreal tarantula still isn’t webbing, then it’s time to start looking at the enclosure that you’ve set up. Is it vertically oriented? Do you have a piece of cork bark that suitably fills the space so that the tarantula feels secure? Are there enough anchor points for the spider to secure their webbing onto?

It is important to note here that mature males usually abandon all housekeeping. By this I mean that you most likely won’t see them spinning web tubes after their ultimate molt – the only type of webbing a mature male specimen will usually bother with is a sperm web.

This is important to point out because many people posting on forums worried about their adult Avicularia not webbing have often brought home a mature male from a large chain pet store.

You can tell if your tarantula is a mature male by looking at the front legs and also the pedipalps. The front legs will have tibial spurs (they look like little hooks) and the pedipalps (the two appendages that look like they are tiny legs) will have enlarged, bulbous “gloves” at the end.

Does not webbing mean my tarantula is unhappy?

Not webbing doesn’t necessarily mean that your tarantula doesn’t feel safe and secure in their habitat. Newly purchased tarantulas won’t immediately begin webbing most of the time.

However, you should revisit basic husbandry for the species in question if you have one that is expected to be a heavy webber and it hasn’t started creating a web within a few weeks.

Some examples of heavy webbing species include Chromatopelma cyaneopubescens, Pterinochilus murinus (and any of the other African “baboon” species), and Dolichothele diamantinensis. Once the above-mentioned species settle into their new enclosure, they will usually blanket the entire container with a thick web.

Something to consider in the case of any tarantula species that is acting stressed, heavy webber or not, is the location of the enclosure. Spiders want to be left alone. If their cage is in a highly trafficked area of your home where they are constantly being jostled or exposed to vibrations (from a stereo, equipment, etc), then they may not feel secure enough to settle into the enclosure.

If you’ve already ruled out husbandry errors, and you do not have a mature male or a newly purchased tarantula, then it may simply be because you have a species that doesn’t tend to web much. For example, my Aphonopelma specimens are all prolific dirt movers but they rarely create webs.

Why is my arboreal tarantula at the bottom of the cage?

When keepers question why their new arboreal tarantula isn’t webbing, they also often want to know why it’s sitting at the bottom of the enclosure, also. This is usually because they were newly transferred to their home and they don’t feel secure.

Arboreals will also take to the floor if they are being harassed by a feeder that was left in their cage, so make sure you look for any live crickets, roaches, mealworms, or beetles that may be loose.

If your arboreal tarantula is on the bottom of the cage during the night, then you may have walked in on it actively hunting for food. Some of mine will sit out at the bottom of their web tunnels to wait for prey to walk by at night when they’re hungry.

How long do you have to wait for a tarantula to start webbing?

The amount of time that it takes for a tarantula to start webbing up its new enclosure will vary, and it may not happen at all if you have a species that isn’t known for creating webs. In general, it will take a new tarantula at least a couple of weeks to settle in and get comfortable in its new enclosure. In the meantime, you will notice the spider pacing, climbing the walls, and it will not be webbing or burrowing.

Most of the panicked threads I’ve read on tarantula forums are posted by people that have only had their new spider for a few days. If your tarantula isn’t creating a web within this short of a timeframe, there is absolutely nothing to worry about assuming the cage is set up correctly! Your tarantula will eventually get around to making a web, provided that it is a species that has a propensity for webbing, as long your enclosure is set up suitably and you aren’t disturbing them more than necessary. 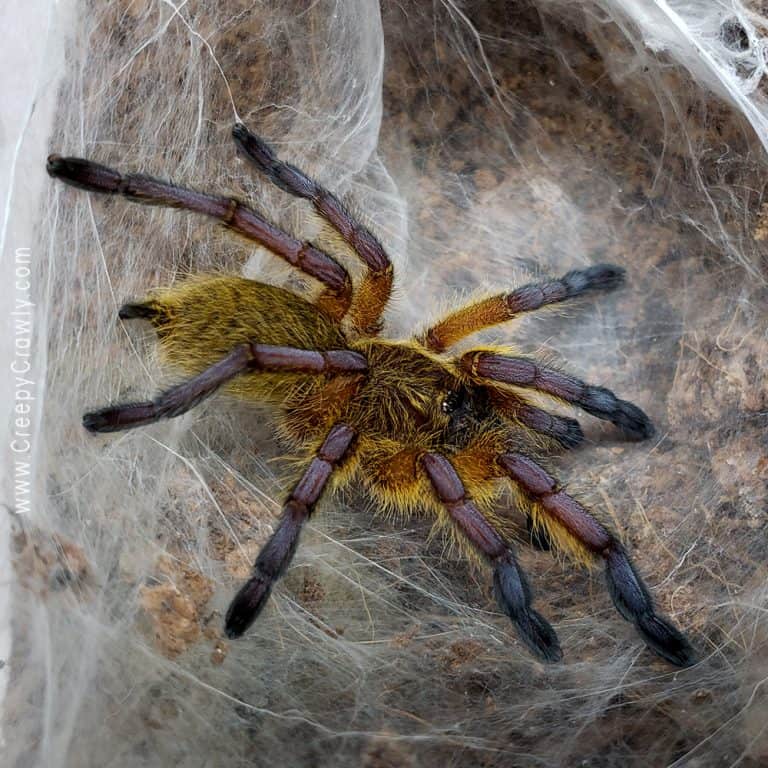