People who have cats, dogs, and other furry critters may attribute personality traits or other abilities to their tarantulas that spiders don’t show because they are hoping for a bond with their pet. It’s important for new keepers to dive into the hobby with realistic expectations of their new inverts.

Tarantulas do not learn to recognize their owners and they cannot be tamed. Avoid getting a tarantula if you’re looking for a hands-on, affectionate pet because a spider is the furthest that you can get from this. Spiders react to stimuli in their environment that they perceive as prey, a mate, or as threatening. This lack of affection doesn’t make them any less fascinating to keep, however, it does mean that a hobbyist must always remain cautious around their arachnids.

Do pet tarantulas get attached to humans?

A tarantula will not form an attachment to their caretaker, regardless of how long they have been under that person’s care. They are only capable of sensing light, darkness, and motion, and they do not visually recognize their owners.

Some keepers speculate that they can learn to recognize vibrations and associate those with food and predators. This is because some specimens have been observed seemingly remembering where the food is supposed to get dropped into their cage.

However, they will never show a preference for one human over another. A tarantula will neither learn to love their keeper or hate them.

When they are showing resistance to moving in a specific direction, or redecorating their cage against their owner’s wishes, it is just a spider reacting to external stimuli. They cannot adopt an attitude and become defiant towards their owner.

Do tarantulas have brains?

Tarantulas are not intelligent in the way that you would classify a dog, cat, or even an octopus. They interpret the world around them using their setae, which are the little hairs covering their body.

The setae allow the spider to sense vibrations, chemical signatures, and pheromones. Some specimens may show a tendency to investigate the lid opening from their cage, or perhaps sit in the same spot that they are regularly fed anticipating food.

Instead of focusing on whether or not they have intelligence, it’s more useful to learn about their brain and nervous system.

As far as a spider is concerned, a human is a large, threatening predator regardless of how often they are the bringer of food.

Although a specimen may tolerate being petted, they don’t derive enjoyment from it like domesticated animals. Petting a species that has urticating hairs can even be harmful to the human.

Can you tame a tarantula so that it likes being held?

A tarantula cannot be tamed. It will always be a wild animal and caution should be taken when interacting with it.

People tend to anthropomorphize pet spiders, especially when they regularly hold them or care for them over the course of years. This can lead to unexpected bites because tarantulas are unpredictable. What they tolerate one day may send them into a threat posture the next.

What happens if you drop a tarantula?

The normal reaction to getting bit or startled by a tarantula is to fling the spider away. This is the primary reason why most hobbyists don’t recommend handling even easy-going specimens.

If a tarantula is dropped from more than a couple of inches, then their abdomen can potentially rupture. This is particularly true of heavy-bodied terrestrial specimens.

In general, arboreal tarantulas are less likely than terrestrials to get injured from falling. Abdominal ruptures are usually fatal to the spider unless the keeper is able to intervene quickly with some first aid.

If the abdomen doesn’t rupture, then a fall also has the potential to damage other parts of the tarantula’s body. For example, you may see fluid leaking from their joints after a fall. The fluid is their hemolymph, which is the equivalent of blood in invertebrates.

Place the tarantula is a clear catch cup if it falls so that you can check it over for an injury. Pay careful attention to the abdomen.

A fall can also damage other parts of the tarantula’s body, like their legs. However, these injuries aren’t nearly as serious because the spider can drop legs if they need to. When they self-amputate, the flow of hemolymph gets stopped to that limb.

As long as nothing looks amiss, then putting the spider back in their enclosure after a fall is the only thing you can do. There is no way to know if the specimen sustained internal injuries, so you just have to wait to see if they survive their next molt. In the meantime, make sure they have access to water.

What happens if you breathe on a tarantula?

New World species that have urticating hairs may start to flick. If you continue blowing on the spider, then these hairs will go airborne and may get on your skin or in your eyes. They are barbed, very irritating, and have the potential to cause permanent damage.

It isn’t recommended to blow on a tarantula to get them to move, especially while doing a rehouse. Instead of blowing, consider using the soft tip of a paintbrush to coax them along as this is the least stressful way to get them to move (aside from putting the old enclosure in the new one and just waiting for the spider to move on its own).

If you’re looking for a pet that enjoys interacting with you and becomes docile over time, then a tarantula probably isn’t the right choice. They’re secretive by nature, and easy to startle into hair flicking, biting, and teleportation. Each interaction with a tarantula should be treated as though it’s a brand-new encounter, you cannot assume that just because the specimen was laid back previously that it will continue to act the same in the future. I don’t personally handle my tarantulas, and I try to keep interaction at a minimum – they are the epitome of a display pet in my eyes. 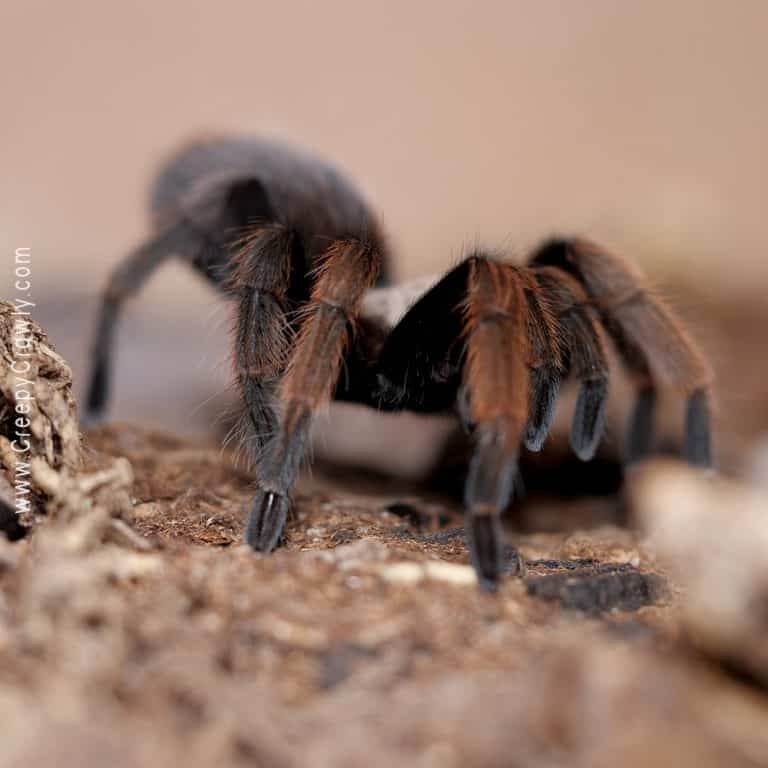