With the push to use proper scientific names for tarantulas, it may seem odd to newcomers in the hobby that African tarantulas are collectively referred to as “baboon spiders.”

Every once in a while, for as long as I’ve been reading Arachnoboards (since 2006), posts will pop up questioning why tarantulas from Africa are called baboons, and whether or not that is the proper way to refer to them. I know I found it very confusing that “baboons” are spread across several genera when I first got into the hobby.

African tarantula species are often referred to as baboon spiders in the hobby, despite the fact that “baboons” are actually comprised of multiple genera under the subfamily Harpactirinae. Hobbyists speculate that they are called this name for one of several potential reasons. The first being that their legs resemble baboon fingers, and the second being that baboons potentially like to eat them, and the third being that they often have a nasty temperament when provoked.

Should I call my African tarantulas by the common name baboon spider?

The term “baboon spiders” is technically not the proper way to label these spiders as you should be using the scientific name to refer to each species within the subfamily Harpactirinae. However, it is a common name that has stuck much like bird eaters and earth tigers.

Bird eaters is a generic term used for any South or Central American terrestrial tarantula species that grows over 5-inches, and earth tigers is a common name for tarantulas that originate from Southeast Asia (Ornithoctoninae subfamily).

In this hobby, common names are meaningless. You will be better served learning the scientific name for the species that you keep (or are interested in keeping) because this will help you find more accurate care information.

Without using the scientific name, it is harder for other keepers to help you with questions. No one knows which species you are referring to when you are just asking about a generic baboon spider because this term can mean any one of the species found in Africa.

Not all African tarantulas are terrestrials, some have arboreal or semi-arboreal tendencies, and as a whole, they display varying degrees of defensiveness.

Why are common names for tarantulas misleading?

One of the primary reasons why hobbyists stress that you should learn and use the scientific names for your tarantulas is because common names can be used for multiple species.

The common name is just an arbitrary description given by the dealer or other hobbyists to refer to a particular spider. Often, these names will be completely made up (as in no other keeper will have heard of it) or they are used to describe multiple species which creates issues with obtaining correct care information in regards to adult size, temperament, moisture requirements, and breeding.

For example, the term “bird eater” can refer to Theraphosa stirmi, Theraphosa blondi, and various Phormictopus species. Basically, any large New World terrestrial can and probably has been referred to as a bird eater.

You may find that some dedicated keepers still occasionally use terms like OBT or GBB when they are casually talking about their tarantulas. However, the difference here is that these keepers also know that OBT refers to Pterinochilus murinus and that GBB refers to Chromatopelma cyaneopubescens. They only refer them affectionately by their common moniker in casual conversations but will use the proper scientific name in any serious discussions.

Where did the term “baboon spider” come from?

There are varying answers regarding the origin of the collective name baboon spiders. One of the oldest explanations is that when the tarantulas sit with their feet outside of their burrow, the legs resemble a baboon’s fingers or look like a tiny hand sticking out.

Other keepers think that it may be because of their often extra fluffy appearance on the base of the legs and their predisposition to a nasty temperament when provoked.

Another plausible explanation for the common name may come from baboons actually eating the spiders. One keeper on Arachnoboards says this:

“I had always been told it was because baboons dig them up and eat them… which was confirmed for me by a coworker who came from Zimbabwe. He said he had seen it personally and that baboons love eating them.”

And this is what one of the moderators on Arachnoboards says about the term:

“You hit it…baboon is simply a broad term for any African t…just like birdeater just means NW terrestrial that gets over 5″. It’s a comparatively meaningless term. The term does come from the legs sticking out of burrows resembling baboon fingers.”

The full answer is probably a combination of all of the above explanations, just as it is with the species that are lumped under the collective name “earth tiger.” I hardly ever refer to tarantulas in my own collection by pet terms, such as OBT, or common names. The more you use the proper scientific name, including while writing, the easier they are to remember! 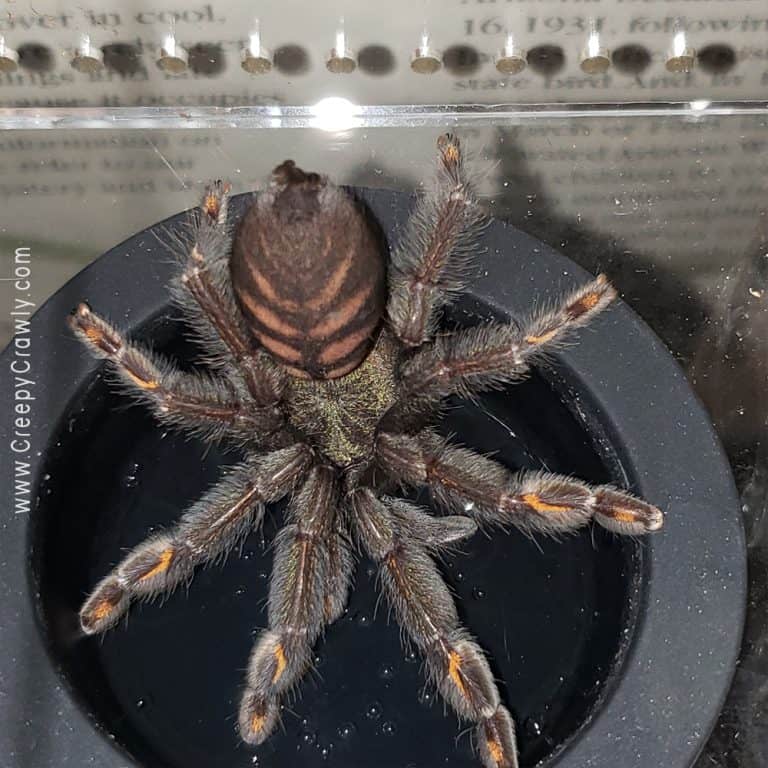